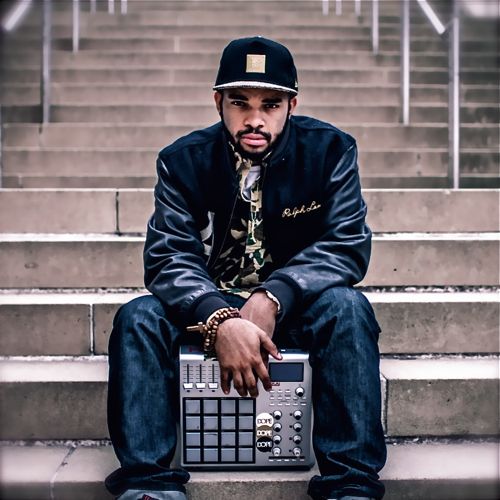 After blessing Curren$y with a set of dazed, grainy loops that form the backbone of Drive-In Theatre, Spitta’s best tape since he talked like a Pilot, Thelonious Martin – 21, bushy beard, bushier eyebrows, flowered bucket hat – is poised for a solid 2014. For one, he actually had a hotel room in Austin this year, a step up from previous treks to SXSW when he had less semblance of, how do you say, a plan. But he’s also infiltrated Odd Future, earned Alchemist’s blessing, and landed on the same Adult Swim bumps that got him making music in the first place. The week after Martin returned from South By, we talked about meeting Madlib, how he balances creation with his Columbia College studies, and what he’s scheming next.

How was your South By this year?

South By was awesome man. Working really hard, running around, I didn’t get no sleep. Met up with a bunch of good people though.

How was it compared to previous years that you’ve been?

Oh it was way better than previous years. My first year was kinda like me running all over the place and not really having anything set. I just went down. Now, everything goes a lot better. This year, I got a hotel. I had an artist’s wristband and a badge for my school. So you know, definitely a step up from going down there just to be down there, in comparison to doing that.

How do you approach the week? Just trying to network as much as possible? What are your goals?

Definitely going down with the thought process of, “Alright, I’m gonna go down and network. Work with artists I don’t get to see on the regular, that don’t come to Chicago.” And you know, stuff like that.

Are there connections you made this year that you’re hyped on?

I got a chance to meet up with Dillon Cooper. Also, my man Denzel Curry. I finally met Mac Miller. That was pretty cool. I met Big Sean. I met an array of people that actually really helped with the process and everything.

You’re still taking classes at Columbia? What are you studying there?

Is it a struggle to balance taking classes with allotting yourself the free time and free mind space to create?

There’s levels to it. I gotta make sure I’m on top of school stuff so I can go to the studio whenever and do what I want. It doesn’t really get to me too much. If anything, school keeps me focused.

How are you feeling about having these Adult Swim bumps?

I mean, it’s been a goal of mine. I discovered instrumental music from Adult Swim, so the fact that I was able to actually do Adult Swim bumps is crazy. Like, I met Madlib when they came and did the show with Freddie Gibbs. And I was telling him about like, look man, I got into making music because of you and Dilla and Adult Swim, and now I have my own bumps. And he was like, wow, thanks. It’s definitely an alumni that you want to be a part of as a producer.

How did it come about? Did they reach out to you?

Ya ya, Jason Demarco saw my music. He really messed with it. And then we started chopping it up about how like, I had always wanted to be on Adult Swim. And he was like, well, send some stuff through. And that’s really how it happened. It was a mutual thing.

Do you feel pressure having been put in that class of producers?

You’ve known Curren$y for a couple years, ya? How did you come to produce most of Drive-In Theatre?

Ya, me and Curren$y met before when we did a session for one song on Priest Andretti called “Talk My Shit.” So we talked then. And when he came back [to Chicago], he was looking for me because he wanted to come smoke weed and make music. So he came looking for me and we just stayed up for six hours and made three songs.

Originally, [Drive-In Theatre] started off as a me and Spitta project, and then we expanded on that and reached out to other people. He reached out to me, like, hey man, I’m working on this project. I think I’m calling it Drive-In Theatre. And I sent him the intro. He did the intro, and then I kept sending him stuff like that. Then we looked up and I had seven joints on there.

Did you help with concept? Or did the Godfather thing come from Spitta?

The Godfather thing was definitely all Curren$y. But I definitely played into it. It was called Drive-In Theatre, so I wanted to make sure the beats were really jazzy and cinematic.

The tape has 250k+ downloads. Do you follow numbers like that? How does fan or critical reception play into how you measure your own personal success?

For me, I look at something like reception in terms of what my next move is gonna be. If the Curren$y thing is doing good, what does it allow me to do after this? Like, I don’t necessarily think of taking one thing at a time. There’s always gotta be something else like, afterwards. So right now, I’m working on my album. And with producing half of this Curren$y project, I can reach out to more people and say, I have this Curren$y project. Pitchfork gave it a 7.6 out of 10. They usually slaughter albums. So it’s kinda like, you know, I did something at this level. Now I’m opening up the door to go do other things. I kinda gauge my success on how I can set myself up for the next move.

Is Wunderkid an instrumental album or are you trying to get features on it?

There’s gonna be a few features on it. And the features are gonna be incredible. I can speak on them too much right now. But it’s about to be crazy.

Are you deliberate about trying to make single-artist, single-producer projects?

I really do enjoy doing the single production projects. I got one coming out with Willie the Kid, who has been one of my favorite emcees for the longest time. So to do a project with him is gonna be really dope.

How do you approach those projects compared to working with artists on a song-by-song level?

The thing is, at the most, I would rather have a project have a foundation, a core sound. And I feel like when artists do that, they tend to step up better. Like, for Schoolboy Q’s album, it really worked because Nez and Rio set the tone for that album. Drive-In Theatre works because I set the tone for that album. When the tone and the theme is set, when you do reach out to other producers, there already is a theme and a sound. Everyone can just go off and branch off of that, so that it’s really cohesive.

How do you approach the creative challenges of working with someone strictly through email?

For me, with projects like that, if I can’t get to them, we communicate really heavy. Even if I’m not there, the fact that I’m not there, we still communicate, call. Like alright well, the hook’s gotta be like this, or, you know, the song’s gotta sound like that. So it’s almost like I’m there. Those guys go back and fix things if things ain’t right.

What equipment do you use right now?

It’s a balance. When I talked to Madlib, he was saying, thank God for YouTube. Because if you can’t find in stores, but you can find a good dig on YouTube, you can use it. Of course we would all love to find those rare $40, $50 records and be able to use them, but sometimes you can’t find them. It all depends. At the end of the day, as long as you flip it, and it turns into something cold, you won.

Do you feel yourself outgrowing your influences more as you get older?

My work ethic and everything stems from when I used to play sports. But like, when I used to play sports, you would go shoot a thousand jump shots on Saturday or you would make sure you went to the gym and got your reps in. So now, when it comes to music, I make sure that I spend a lot of time studying my craft and also working on my craft. Anything that’s gonna happen is directly from work ethic. It hasn’t been from lucking into anything.

Has it been weird to see so many dudes move out of Chicago? Do you feel the pull away?

I definitely feel it. Because I graduate in a year, so it’s like, I gotta think about flying out. Because it’s very realistic. I have another full year [before graduating]. So it’s like, get through next school year and then potentially moving.

What are your goals for the next year?

Other than Wunderkid, I got the project with my man Willie the Kid. The Polo Sporting Goods Deluxe Edition is coming out pretty soon too. And I got a couple placements that I’m not gonna even speak out about yet, but it’s gonna be crazy.