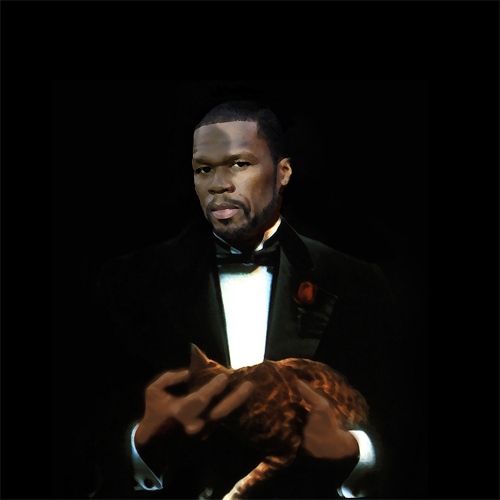 I’ve spent a significant part of the last few years taking the death of gangster rap for granted. The narrative that I’ve run with tracks the rise in popularity of artists like (duh) Kanye West, the explicitly fake Rick Ross, and Drake, and the concurrent fall of Young Jeezy, the disappearance of 50 Cent, the marginalization of Freddie Gibbs.  “Could “Juicy” make it onto pop radio today?”  I’ve asked, in far too many arguments on the subject.  “No, of course it couldn’t.”

Mainstream popularity is one thing and its true that in that arena, gangster rap, like the record store, has fallen from former dominance.  But losing its place atop the heap has allowed the genre to grow stronger and stranger, abandoning label-mandated hooks and a slew of copycat gangsters.  Artists have been freed from the demands of Billboard and are plying their craft straight to the (literally) free market that is the web. Consequently, through the first quarter of 2014, the music sounds liberated again, the best offerings rising to the top.  Artists are out from under the thumb, free to make that which appeals to them.  What the rappers below have in common, is that the music that appeals to them is gangster music. Affiliated with the hustlers, so they made it. No DeSean Jackson. — Jonah Bromwich

The past five years for 50 Cent The Recording Artist have suffered from 50 Cent The Conquering Titan of Industry. When you build a huge portion of your persona on success, how do you rebound when you flop eight times? “Outlaw.” “Wait Till Tonight.” “I Just Wanna.” “New Day.” “First Date.” “My Life.” “Major Distribution” (which is actually dope). “We Up.” Would you play any of these songs at the gym? At a house party? At a barbeque? It’s impossible to give no F’s when you’re “rich as a motherfucker and ain’t much changed.” Actually, everything changes with wealth, because you spend all of your time protecting it. That doesn’t make for great gangsta rap records.

Alas, the shackles of Interscope have been lifted. Forced collabos with Adam Levine are dust. The eight failed singles he released since 2009’s Before I Self Destruct mean nothing, because on “Funeral” and “Hold On,” 50 Cent isn’t updating his business portfolio on record. He is not shoehorning himself awkwardly into Industry Trap Beat #3439. 50 Cent is making songs free from market research, trend hopping and Iovine head pats. And both songs can hang with anything from his early classics of 2000-2007.

“Hold On” is similar to “Ski Mask Way”–a stripped down soul beat with a snaking bassline topped off with glorious stunting and shit talking. “Fuck a Boy Scout, I’ll air your ass out” meets great tactical thinking with the line “You a gangsta for real, you ready to ride, n**** you gon’ die from a bad case of too much pride.” The other single “Funeral” unlocks 50’s ice cold storytelling ability that has gone dormant. “We all can’t win, some of us gon’ lose, just envision a little dog barking at a pack of wolves.” This is the guy who lost to Kanye, Rick Ross and Jay Z, making his best work in half a decade. — Zilla Rocca 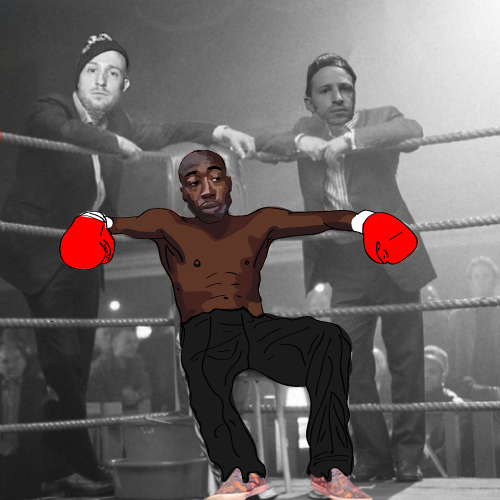 Listening to Freddie Gibbs go toe-to-toe with Scarface on “Broken,” it’s easy to forget that a 12 year age gap separates the two. Such is the power and pathos of Gibbs’ voice, an instrument as rusty and hard-edged as the Gary neighborhood he grew up in and one that can imbue even recent memories with weighty nostalgia. Were a novelist to attempt a tribute to Elmore Leonard, he could do little better than Gibbs as a protagonist: a sweatsuit wearing, Midwest gangster turned California king pin, equally at ease in the streets, strip clubs and studios of his adopted LA.

Unlike native Angelenos ScHoolboy Q and YG, who paint their street tales in high-gloss IMAX 3D, Gibbs’ Piñata harkens back to 70’s blaxploitation via 90’s-style boombap: there are missing reels, a heavy dose of adult content (both in the X-rated sense and in terms of maturity) and a consciousness that belies Gibbs’ rep as the realest man in rap. While his peers are tortured by their street memories, Piñata sees Gibbs breathe an unrepentant sigh of relief: he’s glad to be out, but he’s not afraid to go back. — Son Raw

Kevin Gates – By Any Means & the Return of Boosie 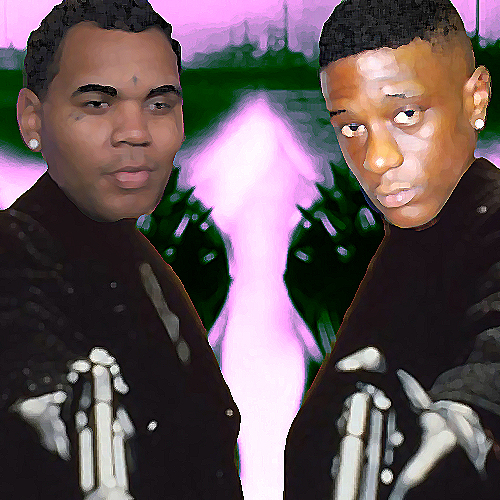 Baton Rouge is to New Orleans what Newark is to New York or the East Bay to San Francisco. It’s the same language but a different dialect. BR is more savage than its slicker creole neighbor. Before C-Loc had a chance to make it with the masses, he wound up incarcerated. It’s a city so overlooked that people wrongly think that Young Bleed, the city’s biggest pre-Boosie star, was signed to No Limit.

The cliché is that rappers are supposed to put on for their cities, but most metropolis’ get overcrowded. Baton Rouge didn’t just embrace Boosie, he became a combination of folk hero, flagbearer, and most loved outlaw. Along the Airline Highway, he’s somewhere between Leadbelly and 2Pac— breeding inspiration and enmity in equal parts.

In his absence, Kevin Gates ascended to stardom. Years before he signed to Atlantic, he sold out sweatbox clubs throughout the state. They’re different rappers controlling different lanes. Over his last three mixtapes, Gates has created his own mold for a modern gangsta rapper: obsessed with vampires, astral projection, and violence. He’s closer to a Ghostface Killah in that you’re unsure if he’s going to cry or kill you, or both. With both on the same label and newly free, it’s probably the best time ever to be a Baton Rouge rapper. The only question is whether they can continue to represent their city without it devouring its own. — Jeff Weiss 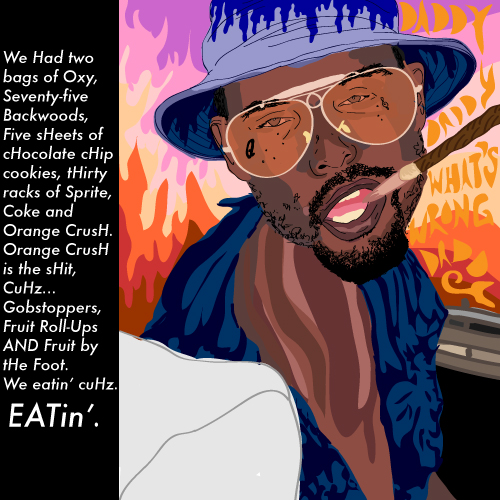 A little over a year ago, ScHoolboy Q played S.O.B.’s in Manhattan a day after “Yay Yay” was released. He turned every song from Habits & Condractions into moshpit anthems before closing with “Hands on the Wheel.” No more than 20 seconds passed before he cut it off, said “That’s not the one anymore,” and put on “Yay Yay.” The place erupted, reciting every word, as Q jumped in and rapped from the crowd. Leaving to an absolute frenzy he yelled “What’s my album called?” and everyone shouted OXYMORON. Then “Yay Yay” didn’t get enough spins on the radio. Neither did “Collard Greens” and ESPN fucked up and leaked “Hell of a Night” during the NBA Playoffs. All of this caused delays and due to Kendrick’s massive success, they weren’t rushing unless they had another “Man of the Year.”

Fast forward to February 22nd of this year, three days before Oxymoron was finally released and would go on to be TDE’s first Billboard #1. I was working on Houston St. when I looked up and saw ScHoolboy Q walking by. He came over to shake my hand before continuing down the street, alone. His expression resembled Joe Girardi’s after the Yankees won the World Series in 2009: “Finally.” A look of relief combined with anguish, knowing that it will never be enough.

Oxymoron was supposed to be Q’s Doggystyle. He shares Snoop’s charisma and his story needs to be heard. The best moments are Q’s street-tales: sticking up ice cream trucks, making sure you hit your quota and selling dope in Seattle. He’s also Gonzo-Q, pink ‘stache or purple-drunk, throwing his voice any which way, letting us forget reality. No matter the content, when you’re one of the best rappers on the planet it’s hard to make a bad song. Oxymoron is good, but it’s bogged-down by features that keep it from being great. It’s a shame they didn’t stick to the Gangsta blueprint, because there’s a great album inside the Oxymoron files. Here’s to hoping Q gets his independence back. — Brad Beatson 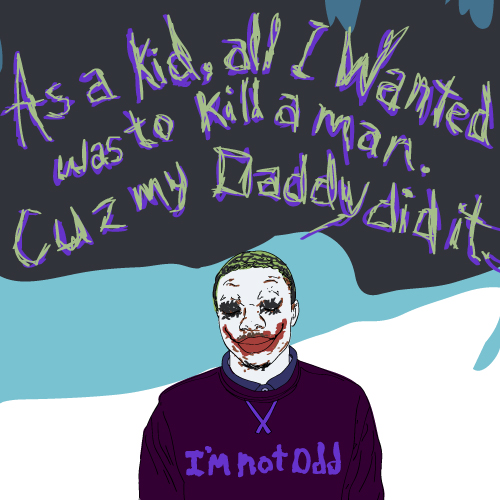 Vince Staples isn’t a master of dense wordplay. His sociopolitical analysis isn’t all that nuanced. If a vet like Freddie Gibbs has earned his stripes, this Long Beach MC is still on the front lines, running point on a path set down by so many sturdy gangsta rappers before him. On his new mixtape, Shyne Coldchain Vol. 2, Staples frames the bad deeds of the gangbanger as a means of survival in a nation built on the backs of slaves. But if Staples is self-aware, he’s also proud of his street credentials, and he clearly takes pleasure in making people piss their pants in fear.

The mixtape’s central thematic contradiction–simultaneously romanticizing and critiquing this hard way of life–appears in plenty of street-rap productions. But Vol. 2 gets its luster from the disquieting imagery and cold, hard production. Staples’ no-bullshit hook in “Trunk Rattle”–”Mu’fuckas talking shit ’till you show up where they live”–sticks in your mind even without being remotely tuneful, while the piano-and-chimes refrain (care of DJ Babu & Evidence) has Michael Myers-murder-scene written all over it. Ultimately, though, it’s “Nate”–a poignant, vivid portrait of a young boy’s admiration for his deeply flawed father–that shows Staples has the potential to rise up the ranks. — Peter Holslin 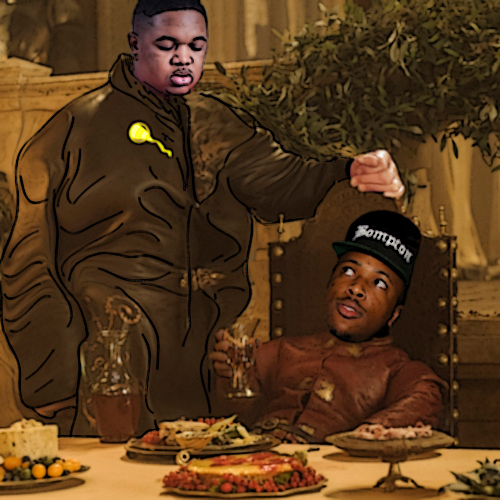 YG is a character, a charmer, someone you can’t help but to like.  He has a code of honor (“dropped him but didn’t stomp him cause that’s disrespect”) and a great sense of humor (“Bicken Back Being Bool” still makes me giggle like an idiot.)  He doesn’t want to get in trouble, or hurt anyone, but it just keeps happening. He’s a rascal, a rapscallion, and still willing to admit that he’s nervous during a home invasion. He loves his mom.

Gangster rap shouldn’t be predictable because it’s made by individuals.  Traits may overlap, but there’s always going to be some funny little thing about your favorite rapper that sets him or her apart, something in their background, in their attitude, in their willingness to confess to all manner of weirdness. It may even be in their love for a certain pitch in their voice, like the one YG uses when he threatens those who interrupt the party. Put a persona like that over beats like DJ Mustard’s, which bus G-funk in from the graveyard to give scope to the ratchet sound, and you’ve got a masterful formula, one that’s resulted in the most high-energy, most outright fun album of the year thus far. — Jonah Bromwich 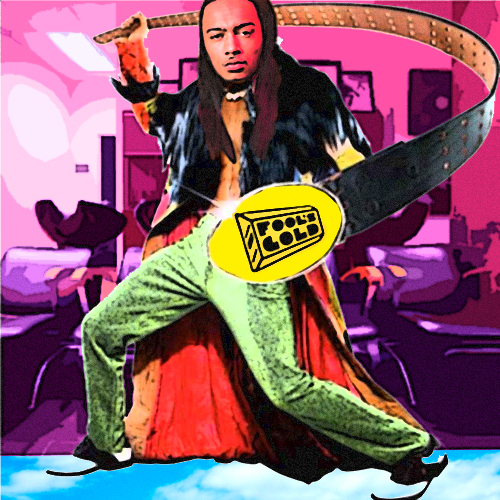 Influenced by pimp raps, inspired by Blaxploitation flicks and compared to Snoop Dog during the Death Row era, 100s has mackin’ in his spirit. The cold hearted 21 year old continues the rhyme style established by O.G.’s of debauchery like Too $hort and Suga Free with all of the key elements of running game: freaky tales, power struggles, fly garments and a vice-like grip on his loot. Combine this with the magical ability to wear a white turtleneck without looking stupid and you’ve found a young don even Magic Juan would appreciate.

100s’ debut Ice Cold Perm was released in 2012 and showed potential with exceptional tunes like “1999,” “Brick Sell Phone,” “Land Of The Laced” and haircare tribute “My Activator.” He’s since signed with Fools Gold and this year released the certified funky IVRY, which improves on its predecessor. The purple-tinted EP benefits from a slim track-listing as well as experimentation with 80’s grooves and tongue-in-cheek melodramatic croons while still maintaining a good dose of R-Rated rhymes.

Unlike his sleazy forefathers, 100s admits he hasn’t actually participated in sellin’ tricks. Instead he’s preaching on the player lifestyle and paying homage to the culture that first infiltrated his brain when he watched American Pimp as a 10 year old. The Berkeley local focuses intently on his chosen subject and it’s not lyrically for the easily offended, but if you’ve always been curious about rocking mint fur in the summer you better catch his wave. — Jimmy Ness