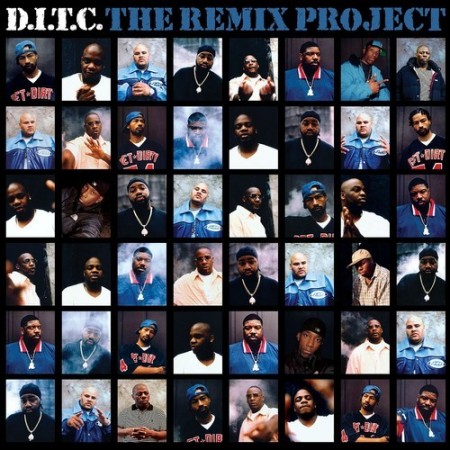 We’re now reaching the Legacy Act phase of hip hop’s age bracket, where men in their forties can trim their facial hair extra thin and comfortably tour off records from the pre-Giuliani days. Young forever. ’93 till infinity.

Right now, a few models are emerging: remain current and fresh while performing decades of old hits (Jay-Z), reintroduce yourself with free downloads of catalogue trapped in dead record label hell (De La Soul), re-release a classic with a focused media strategy (Nas), put out a new album tacked with outtakes from days of yore (Mobb Deep), or bicker over what could have been (Wu-Tang Clan).

DITC has been a well-regarded secret for twenty years, a point of reference that separates a rap fan from a “head”. DITC is doing nothing like their peers to point a neon sign at their heritage. Only Dungeon Family has a roster with bigger names that didn’t become a ubiqitous logo on skateboard decks, high school backpacks, or Target nostalgia tees. DITC suffered from lack of marketing but thrived from an exclusive air to them – they were heard more than they were seen collectively.

Fat Joe, Big L, Lord Finesse, Diamond D, OC, Showbiz & AG could never headline Coachella, but any rapper who has headlined Coachella has worked with, competed against, or worshipped any one member of the crew. As a unit, they’ve only released one proper LP, their self-titled 2000 album which collected their underground vinyl classics led by the DJ Premier produced single “Thick”.

The last decade and change has produced numerous releases from all members. The name is still greeted with a sly smile and staunch head knod amongst backpackers with a mortgage. “Da Enemy” still leaves jakes shook. So the decision for Diggin In the Crates Crew to bless the marketplace with a remix album on May 7th, stacked with heavy hitters like Alchemist, Buckwild and DJ Premier, is ponderous. Scarcity has been the crew’s greatest asset.

Thankfully, the first two leaks are just as good as anything cooked up in the Boogie Down and handed to Fat Beats for vinyl-only access. Alchemist’s take on “We All”, a forgotten OC & AG jam from a Showbiz album, continues his run of horror movie kufi smacks. DJ Premier reminds you of his prime years behind the boards on his remix of the original call to arms “D.I.T.C.” from 1991. Both songs are worthy of a dust jacket and daps from Percee P. OC and AG have maintained a professional air on the mic, and twenty year old punchlines from Lord Finesse still make you chuckle. You feel strange with no Yankee fitted on your head while listening.

DITC is a legacy act by age only, a supergroup who never exploited their status. The new remix project is loaded with respected producers who have worn their influence. Their is no reunion tour, no thinkpieces, no torrent sites crashing down upon their return. For a crew who released a single called “Dignified Soliders”, anything more would go against the grain. With DITC, less has always been more.