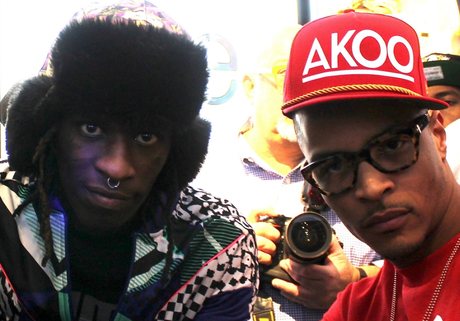 Jimmy Ness is like the Clevaland Cavaliers – even when he loses, he wins.

Septum piercing and distinctive squawk intact, Young Thug assists T.I on a track that may end up on the latter’s ninth album Paperwork. While “About The Money” is technically T.I’s song, he allows the 21 year old’s lean-addled antics to dominate. The duo works surprisingly well, despite one being a staunch family man and the other flamboyant enough to make Andre3000 blush.

Thug employs his signature frantic ad-libs, sing-song raps and whimsical rhymes over stunted church keys. He drops lazy bars like “smoke way more weed than a guy in LA” whilst his unintelligible yelp swirls in the background. A thousand upset backpackers rush to the Okayplayer forum every time he rhymes, but his charisma is difficult to deny. If you came here for a solstice from the typical rap tropes you’re in the wrong place.

While Gucci Mane was innovative enough to tap into the popularity of young rappers like Migos or Young Thug, it’s surprising more veteran Southern rappers haven’t caught on. T.I has struggled with mediocre album singles, so it’s good to see he’s finally used his guest’s magnetism to benefit the music.

T.I often operates best in a supporting role. He’s not a boring rapper per-se, but his understated presence and delivery stands out when he rhymes a snappy guest verse. See his verses on “Rack City,” “Big Beast” and the “Plain Jane” remix for further proof. On this track, the Trouble Man mainly sticks to hook duty. He still finds time between a few quick bars to shout out UGK’s classic “Pocket Full Of Stones” and that’s all we need.

Thug’s the rap oddity of the year, you either love or hate him. Either way, it’s tough to deny his persona on tracks like this. Scuuurt!