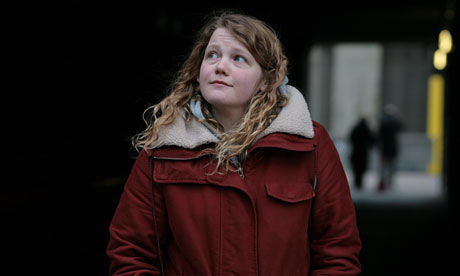 B. Michael Payne motions his maids to bring him toast and eggs

Kate Tempest is doing it all backward. There are literal volumes devoted to making the argument that rap = poetry. There are probably exponentially more half-baked term papers linking 2pac-v-Biggie to Wordsworth and Coleridge. When rap does reach a “Lyrical Ballads”-level, as it did a few years ago with Kendrick’s good kid, m.A.A.d city, the collective music press collectively shits itself. Tempest, whom The Guardian said “pipped six others” to become the first person under 40 ever to win the Ted Hughes award for innovation in poetry, has released one of the most striking and exceptional rap albums of the year.

On its face, Everybody Down bears a strong resemblance to The Streets’ A Grand Don’t Come For Free. Like Mike Skinner’s Joycean classic, Everybody Down tells the story of a relationship as it unfolds and unravels. Unlike Skinner’s story, Tempest’s tale inhabits the points of view of myriad characters, giving voice to their hopes, dreams, and fears in a kaleidoscopic way that strives for truth while acknowledging that everything’s relative, that “the world is the world / but it’s all how you see it”.

The lead track, “Marshall Law”, contains one of the album’s thesis statements: “One man’s flash of lightning ripping through the air / is another’s passing glare, hardly there”. It also introduces us to the principle characters, Becky and Harry. Becky is a student who waits tables, gives massages, and dances in music videos. Harry’s a low-level coke dealer who dreams of opening a club called Harry’s Place. When the two meet, Harry sees a lightning flash of hope; Becky gets the passing glare.

The album is a hybrid of good kid and A Grand, combining the former’s gritty detail with the latter’s romanticism. So there’s Becky,

Holding tight to her glass.
Good coke, brain fast.
She watches his face as he talks.
Little bump on her fingertips
Expert. Quick snort.
Sucking on a cigarette, feeling vaguely bored.

I would love to,
Just for one day,
You know, live like any other guy.
I can’t have a girlfriend, you see
‘Cause I don’t like to lie.

And Harry’s brother, Pete, who ends up with Becky, also ends up unhappy as,

he looks at his girlfriend
And feels like
He is in love with a whirlwind.

As the album proceeds, Pete and Becky fall into and out of love, Harry and his friend Leon rip off a slightly less low-level drug dealer in a grim scene:

Steel toes, hurricane hands, calm face.
Joey drops suddenly
Like a kid with his first pill.
Harry’s at the stash
Getting the cash,
Leon works ‘til
Joey’s just a pattern in the carpet.

If the words don’t leap off the page it’s because they don’t come truly alive until they spill out of Tempest’s mouth. She made her start as a weird 16-y.o. white girl in London, “rapping at strangers on night busses and pestering mc’s to let her on the mic at raves”, as her bio confesses. She would be called a ‘slam poet’ if the name weren’t basically the most embarrassing thing a person could be called.

The work for which she won the Ted Hughes award, “Brand New Ancients”, is a spoken word piece – backed with ambient, orchestral, and electronic music – about how what if there were a world in which we were all gods? Her background in “spoken word theatre” is a natural bridge to rap. Tempest’s career has run on a double path: one that’s led her to writing gigs for the BBC, Royal Shakespeare Company, and Channel 4; another that she describes as: “at raves, somebody would be on stage and I would be like, ‘Nah, this guy needs to see me rap,’ and I’d try and wrestle the microphone. Especially with the way I looked, I was invisible. But what I could do once I had the microphone”.

Everybody Down is produced in full by Dan Carey, a fellow Londoner who’s produced the likes of Bloc Party, C.S.S., and Hot Chip. The album has a varied and cosmopolitan sound that creates a space for Tempest’s words to breathe. The duo created the album in about two weeks, and its compressed period of genesis shows in its wide aperture, razor sliced focus.

It comes at the big questions – meaning of life, nature of truth, what’s love, etc. – using small angles and leverages. Tempest’s choruses use direct language (“But as long as you live for other people’s opinions / you’ll never be more than afraid”), serving more as subtitles for the songs’ imagery than anything else. While the album isn’t didactic, per se, it does try to chasten the listener against making rash decisions. So we get a guy they call Rags,

Why?
‘Cause he leaves bodies in tatters.
Not the type of man to be flattered.
Eyes like patches on a blood stained mattress.
Taps on the window and it shatters.

He ends up espousing a live-and-let-live philosophy before going on a date with a young lass. Poor Pete, “heart full of rain / eyes full of evenings / spent in a dream”, finds himself bloodied. And Harry, the likely loser, ends up on top. There’s nothing fancy going on other than some close observations and truly toothsome vocal deliveries. But it’s the small things, the way life accretes in the space in the space between these moments, that create a world that’s bigger than the sum of its parts.

On “The Beigeness”, one of the album’s singles, Tempest says, “life is huge but we have shrunk it”. She means it, of course, in the sense that the vastness of life has been made trivial by our inattention. But on Everybody Down, the idea comes to mean the opposite, too. In the same way that Nas made the claustrophobic Queensbridge projects come alive in widescreen technicolor scope, Kate Tempest transforms her shitty little district of London into an illuminated world full of wonder and heartbreak. In doing so, she shows without being at all stuffy or academic that rap and poetry are the same thing.