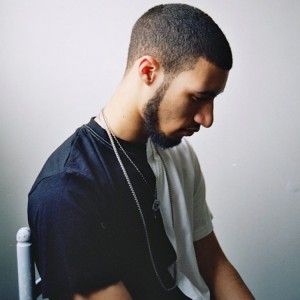 George Santayana wrote that “Those who cannot remember the past are condemned to repeat it.” That statement is an annoying platitude at best, but that doesn’t make it entirely untrue. On a macro level, the nation nervously adjusts its collective protective cup in preparation for a possible third kick to the balls in Iraq, having forgotten about the first two already*. On a micro level, musicians well-versed in the intricacies and motifs of their genre(s), and interested in progressing said genre, are often the most intriguing artists. Visionist’s I’m Fine Part II is the work of a man who loves grime, and makes forward-thinking music steeped in the genre’s short, but rich, history.

Visionist’s music is, like the grime which precedes him, masculine, but sneakily so. The emotion most easily associated with Visionist is sadness, but his approach to melancholia is infinitely harder than R&B bitchboy croonfing– Visionist is far more Trim than Craig David. I’m Fine is stone-faced heartbreak, an unyielding mood of depression and silent suffering. Visionist takes the coldness of Eskibeat to its most extreme– I’m Fine Part II is no fucking laughter, zero degrees Kelvin frigidness.

Though I’m Fine Part II is just a six song EP, Visionist takes his time crafting the air of icy unease. Grime is, traditionally, lyrical, which I’m Fine Part II certainly isn’t. The sound palette with which Visionist works is, however, similar to his predecessors. For example, “More Pain” utilizes the rewind sounds and one-two bass punches common to grime, but the “song” itself is hardly a hyperactive banger. To call all of the material on I’m Fine Part II songs in the traditional sense is perhaps an oversell– Visionist largely eschews typical song structure in favor of atmospherics. Like frostbite, the EP is very much a slow burn.

A less talented producer would struggle to convey Visionist’s depth of emotion, but his utilization of pinched, haunting vocal samples and spacey beats sends a message of unrelenting woe. I’m Fine Part II apexes at “First Love.” If the song is any indicator, Visionist’s first love surely ended in heartache. “First Love” is collapsing Arctic ice shelf type shit, its high-pitched, stuttering vocal sample backed by a driving drum beat. This is the most accessible realization of Visionist– dance floor ready, but sacrificing none of his legitimate emotional heft. I’m Fine Part II is a nice contribution to Visionist’s rapidly expanding catalogue, and continues the fine work of Part I. There are few people making dance music more consistently genre-bending and boundary-pushing than Visionist.