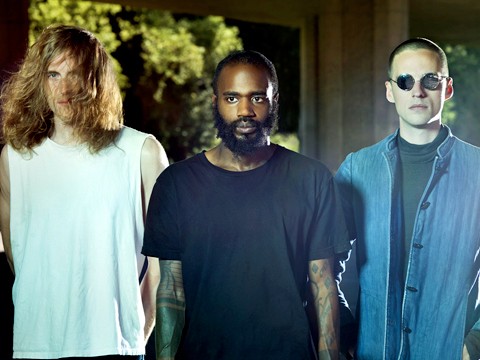 Peter Holslin spent all his bitcoins on a Fabergé egg

After four years of manning what they call a “conceptual art exhibition anchored by sound and vision,” Death Grips have decided to go the way of Seinfeld and quit while they’re still at their “best,” according to an announcement they made on Facebook on Wednesday.

In true ostentatious shock-rap style, this means suddenly canceling all their upcoming shows, spreading the news via a barely readable handwritten note, and referring to themselves as no mere “band” but, in fact, a “conceptual art exhibition anchored by sound and vision.”

However, something tells me this isn’t the last we’ve heard from Flatlander, MC Ride and Zach Hill. Here’s some hypotheses as to what the trio will do next:

-Suddenly announce that they’re not actually breaking up, re-book all of their canceled shows, and chalk up the whole thing as yet another one of their crazy “performance art” routines.

-Start a new group called spirG htaeD and rerelease all of their albums with all the tracks playing backwards.

-Go into visual art and unveil a series of ultra hi-def snapshots of messages written on dicks in Sharpie (with contributions from Terry Richardson).

-Diversify their merchandise by introducing the new squeeze workout “Death Grip”, Where you can enhance your forearms in only 6 minutes a day! Available at Kohl’s!

-Release a documentary revealing that the entire band was an elaborately planned hoax in the vein of Joaquin Phoenix’s I’m Still Here.

-Reform as a groovy jazz-fusion combo and release a concept album about Stonehenge titled Jazz Odyssey.

-Assemble an army of testosterone-addled teenage Death Grips fans and use them to take over a small African nation.

-Stage a reunion tour wherein they don’t perform, but instead have audience members smash all the equipment onstage.

-Issue a heartfelt apology to L.A. Reid, CEO of Epic Records, via Tumblr.

–Try out for the Toronto Raptors.

-Blame Jerry Heller for signing over all of their publishing to Eazy E’s son.

-Transition to a film career like Rob Zombie in order to remake the 1977 horror classic Death Bed: The Bed That Eats

-Start a record label so they can then kick themselves off of said label and release all their music for free online.