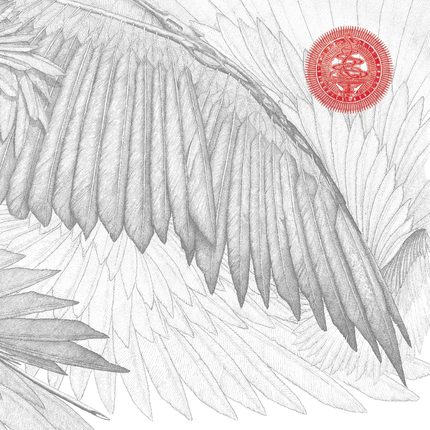 What do you do when your career defining classic’s sound unwittingly becomes the template for a genre’s worth of horrible music? The Bug must have asked himself this question a thousand times during the 5 years since London Zoo became the defiant soundtrack to student protests and urban riots on one end, and the template for Brostep stupidity on the other. After all, Martin’s interest in combining the aesthetics of Jamaican soundsystems and “heavy” music predated the genre-tag he was saddled with by nearly a decade, and he was never fully comfortable operating in a DJ-led scene that emerged from Garage. Retreating to the shadows, he moved to Berlin, took his sound on the road in a series of eardrum shattering shows both as The Bug and a third of King Madas Sound, and generally took his time, letting the storm blow over. It was worth the wait: Angels & Devils not only matches London Zoo in terms of originality, quality and intensity, it also elevates Martin to the rare breed of musican able to destroy and rebuild his sound without sacrificing it’s best qualities.

Like Massive Attack’s Mezzanine and Portishead’s Third before it, Angels & Devils draws a clear line in the sand between it’s creator’s music and the off-brand imitations it’s sometimes compared with. At first, this is disorienting – tracks like “Void” and “Fall” maintain Martin’s hand crafted distortion and bass weight but divorce him from the dancehall chat that had become his trademark. In its place, new collaborators Liz Harris and copeland whisper dark tidings, fundamentally transforming the dynamic. In fact, patois doesn’t even make an appearance until midway through side 1 when Miss Red delivers the stunning “Mi Lost”, a Bug track that actually… grooves? This ability to rebuild The Bug from scratch without losing the inherent qualities that defined the project make the album’s Angels side one of the year’s greatest surprises, and should also wet the appetites of anyone looking forward to Martin’s return to King Midas Sound.

The record’s back half, the Devils in question, returns to Martin’s roots as a creator of ultra-heavy, high-speed riddim music and in 6 records he dispels any doubts about who truly runs this side of the dance. By paring down the bangers to a concise 20 minutes, Martin doesn’t take away from his sound so much as squeeze an album’s worth of madness into an EP length, abandoning the restraint needed to deliver this kind of sonic assault across a longer timeframe. London Zoo was always as indebted to Grime as it was Dubstep given its emphasis on vocals, and Devils reitterates this point by bringing back longtime collaborator Flowdan and introducing his Roll Deep associate Manga. Both deliver the performances of their careers, laying waste to some of The Bug’s strongest beats, matching previous classics like “Skeng”. That’s no easy feat; it’s clear that these weapons have been a long time in the making, mixed down and remixed for maximum devastation.

Records like Angels & Devils are all too rare in our era of cynical poptimism and capitalist EDM. Alternatively beautiful and punishing, it’s a testament to the power of craft and ideology at a time when music is too often consumed as Soundcloud throwaways and blog-hyped singles. Tellingly, even the moments that don’t stand out on their own (“Pandi”’s drone rock and an ill-advised Death Grips collaboration) fit in seamlessly within the whole. That the album breezes by so effortlessly while remaining so crushingly heavy, is the ultimate testament to its excellence and reminder that truly good music, needs to carry its (bass)weight.