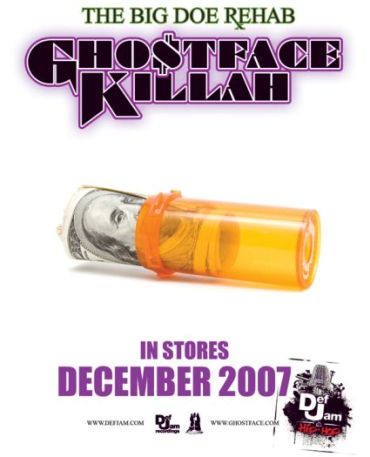 So I uh…interviewed Ghostface last week. It was weird. Weird in a good way, as though it was perfectly normal that the two of us were having a conversation about The Big Dough Rehab, his gripes with the Wu hierarchy and whether or not he ever played as himself in Wu Tang: Shaolin Stylue. I’d say that we bonded but somehow I don’t think “bonded” is the right verb to use when Sean Wiggs was approximately four feet away trying to spit game at what Ghost would probably have called a “fly colored Asian.” But it was still pretty cool.

The interview was for Metromix, so it’s up over there and fairly heavily edited (please ignore the use of “we,” the rhetorical questions, and the erroneous Ghostface dropped the “Killah” from his name fact). Also sniped was a question where I asked Ghost what girls he’d put in the “Who Would You Fuck” skit from Supreme Clientele were he to re-make it today. After breaking into laughter, he diplomatically said that he didn’t want to name names lest he offend someone.

I also reviewed his show at UCLA that night for the LA Times print edition. The link is also below. It wasn’t the best Ghostface show I’ve ever seen, but it was solid and really, any time I get to hear “The Juks,” “Ice Cream” and “The Forrest” performed live, I’m a happy man. Also, the new Ghostface song is below. It’s nothing earth-shattering, but still probably better than almost anything else you’ll hear this year.

Download: (via Nah Right) The First Single from The Big Dough Rehab