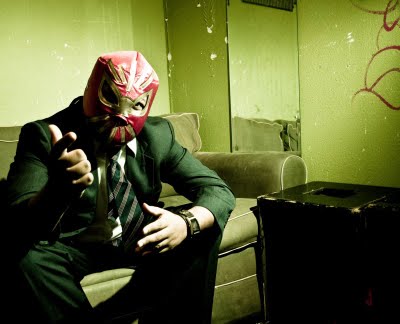 With a name conjuring arsenals of assault weapons and photo galleries filled with him dressed like El Santo, I’ll assign the blame to Ernest Gonzales for causing me to want to make Breaking Bad analogies every time he drops a new Mexicans with Guns track. These comparisons never arise with his more headphone-friendly solo material, but with MwG he seems to craft victory celebrations for the Salamanca gang, where everyone snorts robin’s egg blue crystal and writhes to the sinister bass and 808 crush alongside women who vaguely resemble Selma Hayek. You can trace the lineage of this track through cumbia and reggaeton, but MwG is doing something new. In the way that dubstep and UK funky have devoured house, 2-step, D&B, and American R&B, Gonzales is making tracks that Pitbull would be wise to rap over if he ever got tired of lifting Bucketheads samples.

The original comes from Sonora’s Siempre Fresco, and Gonzales ensures that it’s still fresh. He may be the only man capable of making you shake a leg and then putting it in a figure figure leg-lock, Greg “the Hammer” Valentine-style.