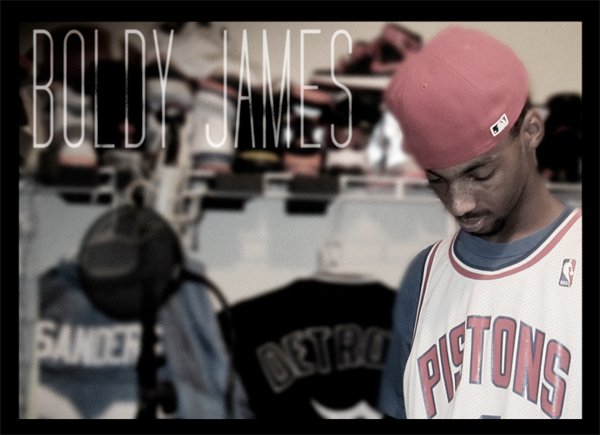 Jimmy Ness is neither related to Elliot nor Neutron.

Boldy James has a love affair with the block. He sounds like Prodigy, flows like Curren$y and creates the kind of grimy tracks that most 90s rappers should return home to.The 29 year old bares his wounds and retells his days of struggle in a similar style to perennial gangsta poster boy Freddie Gibbs.

Boldy’s proud of his hood conquests and the small triumphs that come from making illegal dollars. But he’s also unflinchingly honest in his failures. The Detroit native isn’t playing Scarface and importing Cocaine straight from a Mexican cartel. He’s trying to get off the ground while fighting with family and thinking about the consequences of life in prison.

Last year’s mixtape Trappers Alley: Pros and Cons snuck under almost everyone’s radar. It had enough of an East Coast sound to get the old heads jumping in their rest homes, if only they had listened. Chuck Inglish (James’ younger cousin) supplied the majority of production with help from relative unknown Brains. The album features raw soulful beats which allow room for Boldy’s slurred flow. At 30 tracks deep, it’s too long for a single listen, but he carries the project surprisingly well for his first full-length.

While Young Jeezy and Rick Ross are busy being millionaires, James keeps his raps authentic with regional name drops and enough cryptic dope slang to make Raekwon smile.“Might as well give it all to me, I can move it all, magical with the wand, don’t panic when it dissolve, that’s just it’s purest form, no additives but the arm and hammer.”

When Boldy states “I sold dope my whole life” on track six, it seems entirely believable. His knowledge of local spots, characters, and jargon portrays an intimate knowledge of his craft. Despite a few missteps such as the boring sex talk on Killin’ In The 5TH, there’s a refreshing lack of unnecessary bravado and over-exaggeration.

The concrete king doesn’t spend too much time talking about imaginary guns or girls. Each of his detailed stories is mixed with a grim touch of self-reflection. Many lyrics seem autobiographical and he doesn’t shy away from rapper sore-points such as feeling scared or alone.

On ‘Optional’ James openly states that selling weight wasn’t his choice of career.

“I deal drugs, because the money come much quicker. But I never wanted to be a drug dealer. Giving sacks and satchels to the young critters, setting a bad example for my little sister.”

These small hints at vulnerability make Boldy more interesting than most trap rappers. Admitting that he’s not invincible brings him closer to the listener.
We can empathize with personal worries about safety and relationships, more than we understand putting rims on a Maybach.

James later personifies his street corner as the feminine Connie (from concrete) and dubs himself a concreature. They are separate entities, but have formed a tangled relationship.

“My old lady steady bullshittin’ telling me to stop, but I’ll leave her fucking ass before I leave this fucking block. She loves me, and you ain’t gotta love me. Cause if you don‘t, the block will hug me.”

The duo have an unhealthy alliance, which is doomed from the beginning.
Boldy relies on his neighborhood alleyways for income, but he also knows they’ll be his downfall. By focusing on the personal strain of selling drugs, the concreature enters under-explored rap territory.

Boldy James might be a feared dealer, but he’s also the first to admit he’ll be sleeping in jail cell sooner than a mansion.