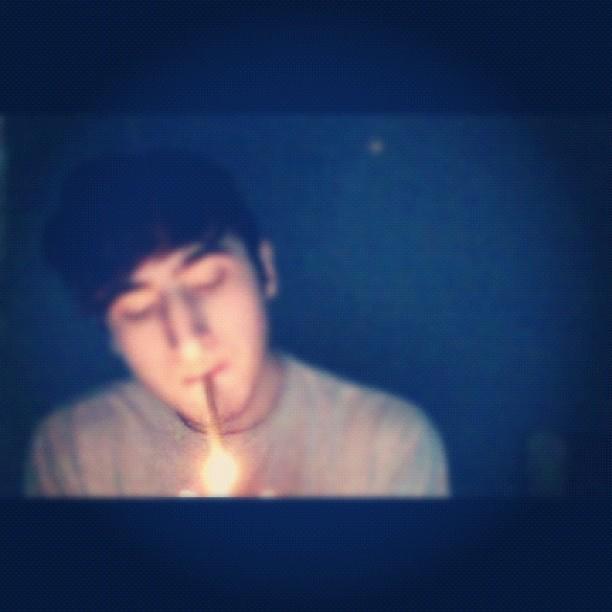 What was the first rap song you heard?
DMX’s “Ruff Ryders Anthem.”

What did you listen to growing up?
Everything. I remember being in elementary school and liking Hanson [laughs]. I went through a rap phase, like DMX, Jay-Z and Nas and then that died out. Then I got into metal really hard. I still love death metal and shit, but I stopped being in bands. I used to record songs with guitar and make the drums with the programs on my computer. And that’s when I started making beats, ‘cause I was just bored.

What were you using to make beats?
Reason. When I first started making music, it was Acid, then I switched to GarageBand and it’s been Reason ever since.

What did your first beat sound like?
It was pretty sweet, actually. It sounded like some Jedi Mind Tricks type-shit.

How did you first start reaching out to rappers?
At that time, I was living with my friend Matt Schwartz. He still raps but I didn’t take it seriously, I was making joke-rap songs back then. He rapped seriously so I would just give him beats. We still make songs now, we made a CD. He’s got an all-original CD of my beats from 2008-2009. We would go to beat battles about 5 months after I started making beats. I just got bored of making beats and I wanted to play ‘em for people. One of my friends told me about a beat battle going on downtown and we checked it out. The first one we did, we got second place. I was like, “Damn, this is kinda crazy”. Everyone was like, “Lemme get your number, I’m trying to get beats and shit.” That’s when people started hearing me besides my friends.

Were you bringing beat tapes to these shows?
Never, never! I was the most unorganized person ever, burning CDs for the beat battle, three minutes before the battle. I would forget to make new beat CDs. Everyone else had business cards and beat tapes ready. Fucking up, I guess.

The Detroit rap scene seems like a tight-knit community.
At the [beat battles] I first went to, I didn’t know anybody. I didn’t know shit about Detroit rap at first. I came from metal and then started doing music. Everybody was saying they work with this person or that person, I didn’t honestly know who anyone was. I ended up moving in with a kid two years ago, and he was a Dilla head and he got me hooked on everybody.

How does your metal background influence how you select sounds
When I first started making beats, I didn’t even know producers like that. I wasn’t jocking anybody’s style. I didn’t even know I liked Stoupe the Enemy of Mankind. I just liked Jedi Mind Tricks. I didn’t know who Dilla was, I just made what was sweet to my ears. I always liked scary sounding shit, like old Three 6 [Mafia] beats, that was kinda metallish. Metal definitely influenced my beats.

How did you hook up with Danny?
I started hanging with this kid Marvin, who was cousins with Chip$, and he brought Chip$ and Fat Ray over to my crib to do a song. Fast forward 6 months, I got into the studio with Chip$ and Guilty Simpson, they ended up doing a song over one of my beats. And everyone fucked with it. Chip$ used to be in a group with Danny Brown, Rese’vor Dogs. Danny and I were listening to beats all the time and kicking it, we just built a friendship. I produced a record for C.H.I.P.$ called “Ponzi Scheme”. Danny fucked with that beat real hard and based off that, he hit me up when he was doing XXX, like, “I got all the producers lined up, I want to you use you to do basically everything else.

This is the concept of the album, this is the sound, you got the rest of it”. It ended up being the opposite, I ended up doing the most on the album.

Why do you work so well together?
I think we have the same intentions, we’re both trying to make some really dope shit.

What was your process for putting the record together?
Now Danny and I kick it all the time, play Xbox and smoke weed. We’re like a band. Between games I’d bust out the laptop and play a couple loops for him. He’d come with ideas like “switch up the bass, change the hi-hat”. He wasn’t hands-on with the music but he’d give me insight and direction.

Take me through your process for putting a beat together.
Usually I smoke. I’m always downloading random music and I’ll sit there, listen to some shit. Pull up Reason and make some drums. Load up any old sample and try to make it sound way different than it sounds. I just try to spark something. From there, it’s nothing. It’s just about trying to get that spark, man.

Does it normally start with a sample?
It could be anything. Sometimes I’ll just try to make a sweet drum part and then try to make something in my head to achieve it.

What are you working on next?
I dropped this sketchy beat tape in April 2010, Strawberry Cough. A year went by, and I was like, “Damn, if you didn’t know me you would have thought I stopped making beats!” Thought I’d put something out but wasn’t ready to put out something official. I wanted to hold out and just drop beats here and there. I ended up getting a van with no CD, no iPod hookup, just a cassette player. I was like, “Damn, I can’t be the only one out here with a cassette player in the car”. It’s not like anyone can bootleg it. I put 47 beats on a cassette, I printed out a hundred. I didn’t really promote it at first, a lot of people didn’t know I had ‘em. A month went by and my friends were buying ‘em off me. One night I posted something on Twitter and I ended up selling out of 75 tapes in a week and a half.

What other collaborations are you working on?
I got stuff with Mondre M.A.N. from Main Attrakionz, waiting to put out some work with Boldy James and Mr. Muthafuckin’ Exquire, that shit is going to be sweet. I’m doing some instrumental collabs this year. I feel I know a lot of sweet producers that people don’t know about. Just trying to do stuff with friends to get their names out. I don’t know if you’re familiar with Black Noi$e, but we remixed Death Grips’s Exmilitary. It’s Ex-Exmilitary. Death Grips dropped all the stems of their EP, the vocals, the bass, the drums, everything. So we were like, “Shit, we should remix this”.

Who else do you want to work with?
There’s just a lot of young cats around me that I mess with that people should know about. I’d love to kick it with Flying Lotus, shit. Like Sonny Digital is like 20, he’s dope too, doing Lex Luger type shit.