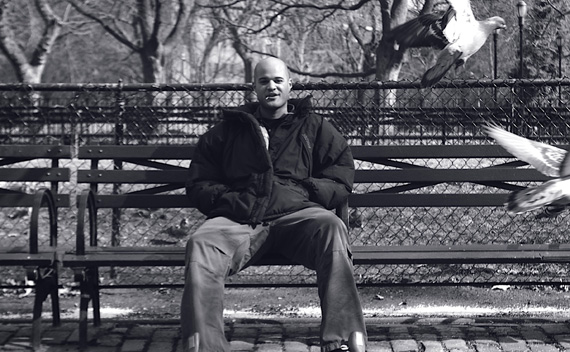 About a year ago, The Beastie Boys and Nas had a song called “Too Many Rappers.” It claimed that there weren’t enough MC’s anymore. One of the many things this told you was that the Beasties were sleeping on Homeboy Sandman. Another thing it told you, (which you knew), is that old rappers get very defensive about the abilities of younger rappers.

Sandman is always perfectly in control of the mic and always thinking about what the beat needs. He’s in harmony with any instrumental. We saw that last year with “A Weird Day”, where Homeboy had fun with the American-in-England theme rapping over a psychedelic beat from Paul White. And now that he’s on Stones Throw,  similarly high caliber production is expected — if not required.

Round one is “Cops Get Scared of Me,” with its creeping minor-key beat supplied by Exile. It’s a study in contradictions: Homeboy flips words, considers the meanings, homonyms and homophones that drift by the beat. There’s a steadiness that makes us concentrate on a song that might otherwise float past. After all, what about Homeboy might scare cops? The answer, one that any conscious rapper would be happy to supply, is his facility with words, his ability to work outside a system and create meaning for himself. But the difference between Homeboy Sandman and other conscious rappers is that he doesn’t just blurt out what he’s trying to tell you. And while you figure it out, he just stays quietly considering contradictions, in total control of both microphone and the underlying meaning.

Download
MP3: Homeboy Sandman – “Cops Get Scared of Me“