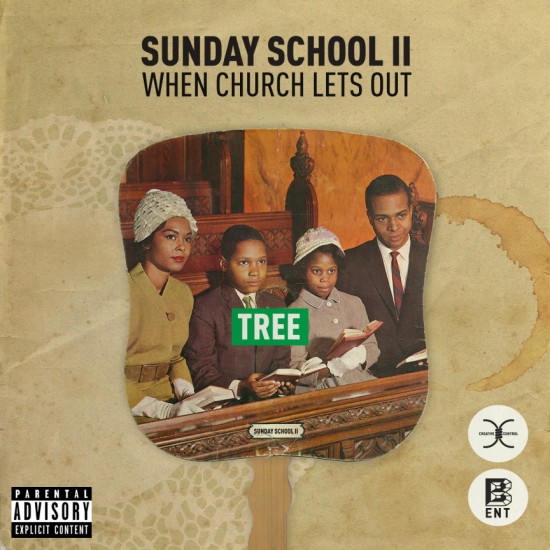 When Jordan Pedersen says he has bitches on the phone, he’s referring to unpleasant customer service people.

In Fist Stick Knife Gun, Geoffrey Canada talks about life in the Bronx before the proliferation of guns, about how you could get into a fight with another kid from the neighborhood without fear of getting shot up. This was in the 1950s and 60s, also the time before U.S. government support for Chinese nationalists and the mujahideen in Pakistan caused the heroin trade to skyrocket, and before – guess who – the CIA helped balloon the crack epidemic because Oliver North thought he could outwit the ayatollah.

Chicago phenom Tremaine “Tree” Johnson grew up after guns, after heroin, after W’s CIA daddy flooded the hood with rock. But the samples from his breakthrough mixtape Sunday School, and its new sequel Sunday School II: When Church Lets Out are all from “before.”

Even in a genre built on reexamining and reshuffling the past, Tree feels like an old soul. Let the other old heads bump Troutman and Funkadelic: Tree would rather haul out the Victrola to spin some classics from the Jazz Age (he samples early 20th century singer Annette Hanshaw on “FAME”) . Even with the barrage of hi-hats – he calls it “soul trap” after all – Tree makes a strong case for being the only rapper who could play at an old folks’ home.

This isn’t to say Tree lives in the past. Sunday School II sits firmly in the modern world, where Tree’s just another kid who grew up in the 90s in Chicago’s infamous Cabrini Green housing project. But while he describes ducking shots like any other kid in the hood, his isn’t the tale of the soulful slinger.

Tree spent most of his youth in church, and Sunday School II overflows with ecclesiastical flourishes: the hum of the pipe organ that opens the album, the gospel choir on “Devotion (Get It),” the concept behind the project itself. But the most overtly religious aspect of the tape may be Tree’s voice, that impassioned, evangelical yowl that makes him sound like a Pentecostal minister even when he’s rapping about “hoes down in the basement.”

Church can turn you into a bonafide born-again, or it can just help you see the upside of wherever you came up. Maybe that’s what  allowed Tree to look up when the rest of his peers were being pushed down by their surroundings. And more importantly, perhaps that’s what spurred him to look back, to the time before guns, heroin, and crack, when Annette Hanshaw worried about men being “mean to me” and Elvis couldn’t help falling in love.

If there’s anything holding Tree back is that while he’s got the best sound around, his range of thematic topics leave something to be desired. The promo art for the album teased a worship service structure, one that the album itself, while nicely sequenced, doesn’t evince. Tree relies on old lyrical workhorses: bitches, boasts, Benzes. He’s got the voice; all he needs now is something more to say with it.

But even if the topics don’t extend much past the three B’s, Tree understands how to preach with maximum power. Who can say no to a pair of rose-colored glasses when they make everything look this good?