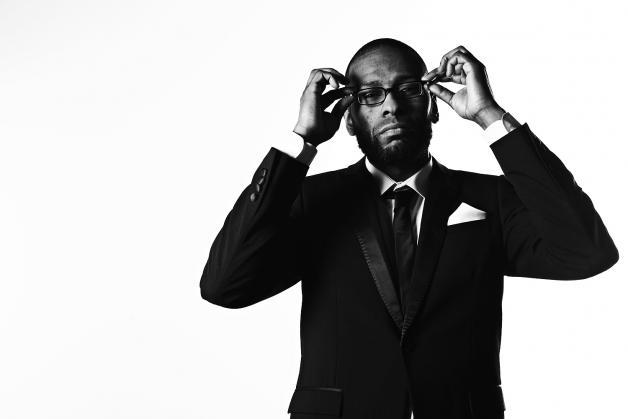 Kyle Ellison alternated with the greatest and updated his speech

When you have a voice like Flowdan’s it doesn’t take much to evoke straight-up fear through the system. Paired with Footsie’s beat on ‘Ambush’ – a sinister hybrid somewhere between grime and trap – the Roll Deep emcee creates what Peep Show’s Super Hans might describe as a ‘powerful sense of dread’. “Warning, I’m already up early morning,” he begins, with a vocal deep enough to make breakfast sound ominous. Storm clouds brew on the horizon, but Flowdan packs an anorak and weed in his bag. Despite the palpable tension, he’s in no particular rush to boot in your front door.

Having first appeared on last month’s excellent Hyperdub 10.1 compilation, the tune now takes pole position on Serious Business – Flowdan’s debut EP for the label. He is of course no stranger to Kode 9’s sonic tribe, having appeared together on The Bug’s now legendary 12”, ‘Skeng’. Since that record back in 2007, Flowdan has been a regular live and studio collaborator of Kevin Martin, who has helped elevate the grime veteran to often devastating and occasionally transcendent heights. Martin’s contribution to Serious Business continues this tradition, as the gut-pummelling bass of ‘People Power’ rumbles along remorselessly – Flowdan’s presence equal to it. “These are the evilest hours,” he warns, “Can you smell the aroma?”

Martin’s influence extends further than just his sole production credit though, and – although varied – this four-song EP carries a physicality comparable to The Bug. Flowdan’s patois flow has always oozed style, but never before has it been this potent. The Coki-produced ‘F About’ is my least favourite cut, but it’s not lacking in clout. It’s surly hook too, “my music doesn’t fuck about,” is as honest as they come. No Nayvadius.

Completing the picture is ‘No Gyal Tune’ – the hardest and most grime-influenced of the lot. If Inga Copeland’s ‘Advice To Young Girls’ was that they reclaim the night and their city from patriarchy, then let’s hope they don’t stop here – this tune deserves to be everyone’s. Up-and-comer Masro brings the beat – interpolated with dancehall, it bounces around excitedly on a wave of at least two different energies. Flowdan seizes this opportunity to enter full battle mode, listing the dead that he plans to leave in his wake – “Mek selector life done. Heartbeat done. Everyting done. Soundclash done. Argument done. My team turn up every soundboy run.” Shady gender politics aside, it’s a tune likely to make good on those promises.