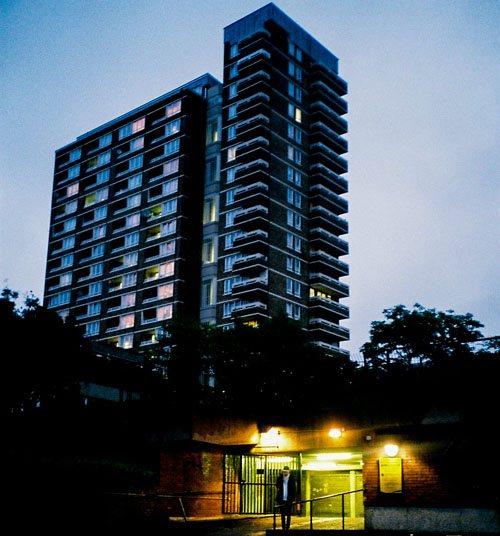 Son Raw runs the blocks and the road.

UK dance music has a bit of a bipolar streak. On one hand, there’s always room for poppy, anthemic belters, but the country’s dark side is never too far out of mind. One needs only check the reverence contemporary producers hold for crews like Metalheadz, DMZ and Roll Deep. Chemist, Coyote Records’ latest signee, revels in the tradition of tense, underground music, crafting records cavernous enough to swallow listeners whole and heavy enough to knock them off their feet. Take a closer look however, and you’ll notice intricate melodic structures as catchy as anything lighting up the mainstream. On the eve of his Boxed debut this Friday and ahead of his forthcoming debut single, I spoke with Chemist to see just how he gets his sound so sinister.

I’m originally from Coventry in the Midlands, which is kind of weird because Grime’s all out of London. A mate of mine moved down to London, but he’d come back to visit and bring back Kode9 and other pirate radio mixes, which is where it all started for me. From there, I started making music in secondary school and have been doing it ever since really: I’m currently studying music composition for film and games at Uni. Prior to that, I grew up on House and Garage – my dad was all into that type of stuff. My older brother was into American Hip-Hop but I never really related to it so I drifted from that and got into Grime that way. I tried to MC Grime but it never really worked out so I stuck with production. My main influences were Wiley and the old Roll Deep Crew. Dizzee Rascal especially, his beats were sick. Nowadays I’m really checking Dot Rotten – his beats really give me that coldness I’m into.

Much of the music we’ve heard from you, including Blocks and Defiance, is built around a huge amount of empty space – much more than your average 8 bar Grime tune…

As I got older, I started listening to Youngsta on Rinse and started making more Dubstep influenced stuff – the darker stuff like Loefah and that type of beat. Synthesis has always been a big part of Dubstep and that’s where it really crosses over for me in terms of space and square waves. Loefah’s been a massive influence. He’s the master of dark and grimy sound. To me, in a way he really made Grime rather than Dubstep with those minimal beats. It just felt like there was space for emcees.

Is filling in some space with emcees a direction you’d like to pursue?

Hopefully. I’ve been in talks with K9 who’s linked with Dark0. Those are just some of those guys where you just have fun being around them. Otherwise, if I were to start working with emcees, hopefully that could be part of a bigger plan like maybe an album.

In terms of your upcoming debut on Coyote – Blocks/Defiance – what kinds of ideas were you trying to convey?

I’ve always been trying to find the perfect mix between melodic and club-oriented tracks. I want the hard-hitting bass of club tunes but the melodic atmosphere in the game and film soundtracks that have inspired me as well, so getting that combination right was my goal for this release.

Are there any particular films or games that you draw influence from?

I’ve always been a fan of Metal Gear Solid and I think that influence shows in my strings and menacing riddims. Other than that, do you know the Legacy of Kain series? They were supposed to make another one and they just canceled it. Those were sick games – I’m pissed off about that! I’ve always been a fan of villains. None of the heroes interest me in films and games – it’s always the darker characters.

You mentioned Wiley and Dot Rotten before – those are two guys who could be seen as villains (or at least anti-heroes) as well.

How did you decide to get Rabit and Last Japan involved on the remixes?

Rabit came over to the UK for a Fabric takeover with Keysound last year, and he stopped by mine while he was over. I mentioned the release and asked if he wanted to get involved, and luckily he was interested. Tom [Fraser] wanted to get Last Japan involved in the label for a while now, and I was more than happy to have him on the remix. I’ve been a big fan of his so I was gassed! The great thing about the remixes is that they’re very different from the originals – particularly the Rabit remix. It’s not really a competition to see which track is better, they bring all bring out different sides of the tunes.

You’re playing Boxed next week, which is a mental booking for anyone involved in Grime right now – what do you have in store?

There’s a few new producers I’ve recently found that I’m excited about. In particular, there’s a New York based artist called Celestial Trax who’s blown my mind recently so I definitely want to include some of his tunes. Only last night I sent him some stems so hopefully that comes together. Otherwise, I think I’ll go for the type of vibe that people would expect from my production: melodic, atmospheric but at the same time hard on the bass.

Is music making a very inward looking process for you? Do you consider yourself as part of something larger with your peers or is it really an individual pursuit?

I make what I want to make, really. Music never comes out quite how I have it in mind. It comes out different. If I want to do a happy tune, I always get bored really quickly, change up the keys and it ends up becoming something totally different. I just kind of flow with it.

Finally, what plans do you have for the future?

Hopefully I’ll be able to get a few more EPs out – if I can finish tracks! That’s always a mission. The long-term vision is to make an album but that won’t happen for quite a while I imagine. I can lay down the concepts at least – so I’ll be working on that.