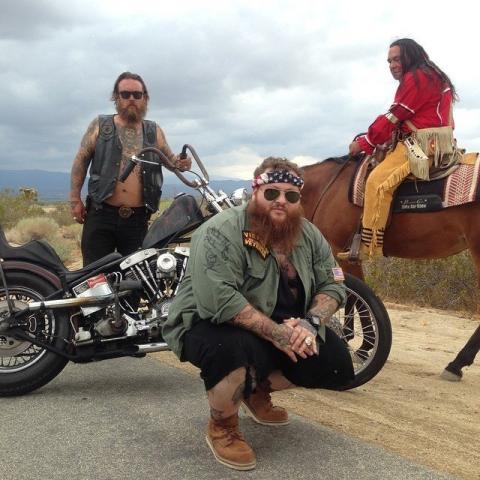 Action Bronson is as Action Bronson does. The Queens rapper’s new song, “Easy Rider,” doesn’t have any fancy choruses or glossy radio-ready hooks or any of that stuff. But that’s not the kind of thing one would expect from the guy who once rapped over the beat from The Champs’ rock ’n’ roll novelty “Tequila,” now is it? With producer Party Supplies supplying the sun-warped psych organ to guide his way, Bam Bam instead embarks on a characteristically epic, colorful and occasionally squicky adventure that finds him:

• Taking “acid for ten days straight up in the mountains”

• “Playing Frisbee in the West Indies”

• Burying “a million in the sand, by the clock tower”

• Riding a Harley into the sunset

The song ends with the kind of rockin’ guitar solo you could’ve imagined hearing on the soundtrack to Easy Rider (the classic road movie) back in the late ’60s. The fact that it’s on this track strikes me as both kind of cool and kind of hilarious. Is Action Bronson totally down with this classic idea of the all-American, leather-jacketed male, plying the highways of freedom with Gibson Les Paul in hand? Or is he just fucking around? Probably a mix of both.