Buy It At iTunes | emusic | amazon 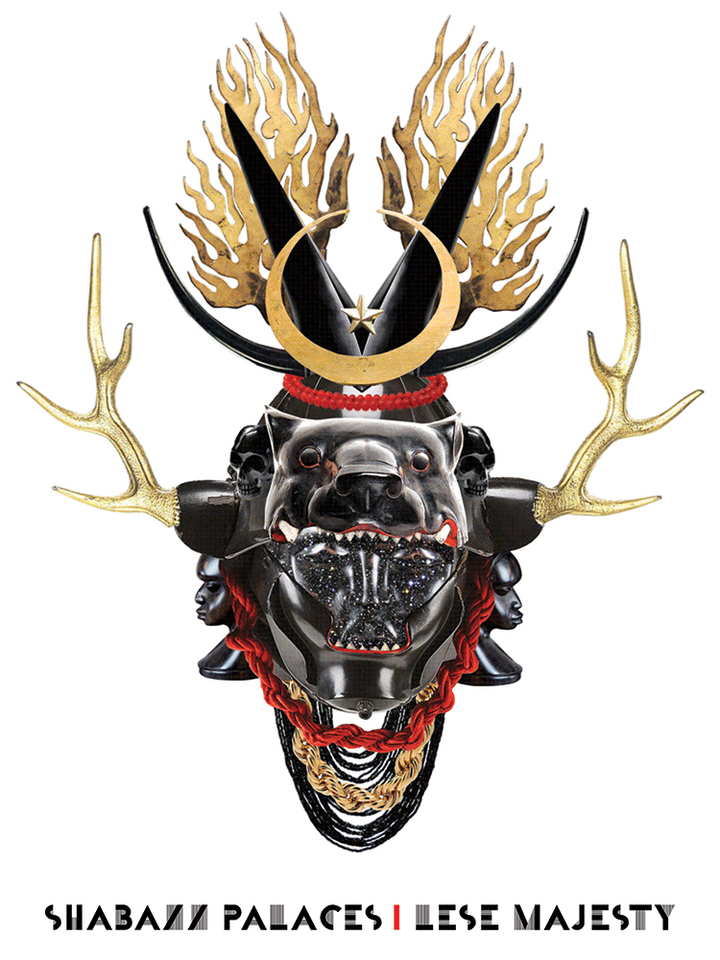 Peter Holslin wrote this from his vacation home on Mars

Ishmael Butler handles the mic like a king. I mean this quite literally. On the new Shabazz Palaces album, Lese Majesty, I keep picturing the veteran rapper luxuriating atop a throne, ruling over some deep space Planet X, as he drops 10-dollar words (“sepulcher,” “farceur”), invents new adverbs (“plushtrously”) and speaks of fantastical groupings and conspiracies (“syndicates of girlfriends,” “colluding oligarchs,” “secret meetings in the stratosphere”) as though this is just how normal people talk. The man once known as “Butterfly” hasn’t forgotten his Digable roots. But he’s come a long way in these 20-plus years, and in his current capacity as Palaceer Lazaro, he sure has poise.

Lese Majesty is 18 tracks divided into seven suites—a sign from the get-go that Butler and fellow member Tendai Maraire take their dignified urges seriously. If the average earthbound artist will release an album as a set of “songs,” with maybe a few “skits” thrown in, these two move in an elevated realm, and thus embrace more ambitious sequencing and titling practices. That said, the music on this new effort is nothing if not understated. While their previous album, 2011’s Black Up, glowed with spaced-out messages and novel production techniques, here they venture deeper into their own sound. The vibe is quiet and heady, the tonal shifts massaged by synth squiggles and booping bass, as though the album is a mothership orbiting a dark fractal of the cosmos.

Lese Majesty is rooted in classic hip-hop themes and images, but it’s the kind of album that makes you realize you’re living in the future that sci-fi novels talked about. In the suite “Federal Bureau Boys,” Butler riffs on questions of exploitation and realness, and the two tracks seem to say as much about how far music has come as what it currently lacks. “Colluding Oligarchs” opens on a brisk, old-school break-beat, but suddenly takes a bolder direction with an intricate narcotic groove. “Suspicion of a Shape” finds Ish dismissing fake artists by way of a line about drum quantization—an interesting metaphor, since it rests on the assumption that there’s both honest and artificial ways of working within the digital realm. (Clearly, these guys are light-years ahead of all those fuddy-duddies still wearing “drum machines have no soul” T-shirts.)

The production on the album touches on a variety of sources. Maraire, a seasoned artist who hails from a family of celebrated Zimbabwean musicians, infuses “Suspicion of a Shape” with a dreamlike mbira loop and some free-form shakes of the hosho, gourd instruments common in the sound of Zimbabwe’s Shona people. But in “Forerunner Foray,” the moody synth vamps remind me of something by New York avant-rock experimentalists Gang Gang Dance, while the propulsive beat driving “MindGlitch Keytar TM Theme” could sit comfortably alongside Suicide’s gasoline-pumping cyberpunk anthem “Ghost Rider.” It all gets tied together, though, thanks partly to THEEsatisfaction’s Catherine Harris-White—who appears on two tracks and serves as a kind of interstellar, neo-soul Greek chorus—but also to the dark, saturated finish of the mix.

Listening to both albums back to back, Black Up ends up with more immediate pleasures: I’ll never forget my sense of awe when I first heard that R&B vocal sample drop on “Recollections of the Wraith,” or Butler’s voice ascend, dawn-like, over the beat of “The King’s New Clothes Were Made By His Own Hands.” Of course, the duo still shows a flair for catchy hooks on Lese Majesty—see the bouncy bass-line in “#CAKE,” or the late-night poolside vibes of “Ishmael.” But this time around, they seem more focused, more purposeful. Which makes sense. For all their chiefly airs, they still titled their album after the crime of offending royalty, emphasizing that they’re happy to ambush any oligarchs—musical or otherwise—who come their way.