Pluto is the rare 21st Century Atlanta Rap album that is an album in the classic sense of the word. It’s an experience, an etched aesthetic that demands end to end listens, and you may find yourself scrolling back to Big Rube immediately upon completion. While Drake, Frank Ocean and the Weeknd push R&B towards dark, stark, minimal places, Future has gone the other direction, injecting MDMA into it’s bloodstream and fucking with the most basic tenants of its format. It’s an otherworldly, genre- shattering strain of pop. — Abe Beame 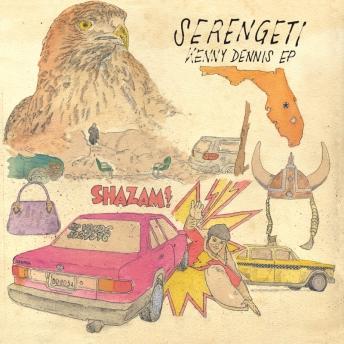 Since the days of “Rappin’ Rodney,” comedy rap has played a crucial role in reminding the genre to stop taking itself so fucking seriously. But no one has ever taken the joke further than Serengeti. At times, he is as insular and zany as Zappy. Sometimes, he is as bleakly comic as Zevon. Sometimes, he just mumbles in a faintly polish accent about O’Douls and onions. But there is no time when anyone can say that they have ever heard anything remotely like the Kenny Dennis EP. — Jeff Weiss

Control System is a dark, confident album, on which insinuations occasionally give over into rebel thoughts. It aspires to mad science, glowing like experiments conducted in the green glare of night-vision goggles — off-kilter but never out-of-bounds. When ‘Soul doesn’t rap about his mission directly or obliquely he’s frequently experimental. Though not as naturally adroit as Kendrick and Schoolboy, he makes up for it with a willingness to try different types of tracks. This is Soul’s system and he’s sticking to it–an individual lane that functions perfectly in the middle of the superhighway that’s growing to become the most interesting movement in rap. — Jonah Bromwich

Hip hop’s best satirist lampoons every element of the rap world while staying true to the poisonous purity of the vision. Continues his one hot album every year average. —Weiss

There’s a gnawing engaging vulnerability on Rich Forever. Ross might be dissatisfied, underneath all those layers of cashmere, Gucci, and moobs. He jokes on “High Definition” that you could call his diamond necklace “the ghetto’s guillotine,” a darker insight than those he usually pairs with the signifiers of his wealth. The cover of Rich Forever is the only cover of any Rick Ross album or mixtape that I can remember where you can see the man’s eyes. And while that’s probably pure coincidence, there’s a clear connection between the openness of that heavy-lidded stare and the issues that Ross is airing out, perhaps for the first time, on this record. After all, being Rich Forever is impossible if you’re dead. —  Bromwich

Galaxy Gardens re-imagines the euphoria of classic rave music as interior symphonies for mind and body. Having never experienced the original rave generation’s drug fueled massiveness first hand, Lone drew from old cassette tapes documenting the scene for inspiration with telling results: his multi-layered melodies and new-age positivity are miles away from the physically pummeling bass that defined the previous decade’s dance music. Rather, the album’s aquatic textures (running water is a recurring motif) and fluorescent synth lines function equally as headphone symphonies and as club tracks, balancing out the digitally saturated high-end with unorthodox drums that ensure the record is more than a simple throwback record.

The cutting-edge sound quality and massive space generated by today’s modern digital workstations allow him to go far beyond his predecessors’ technical limitations while striving for the same goal: to create completely synthetic environments out of the digital ether, crafting a world drum hit by drum hit and synth by synth. — Son Raw

With New Epoch, Japanese producer Goth-Trad has created a rare beast: an album providing plenty of top-quality DJ-food for selectors that also stands up as a straight-up front to back listen. It’s a tough trick to pull off as the extended intros and breakdowns inherent in EDM can make for repetitive listens at home but then again, you’d be hard-pressed to qualify New Epoch as ordinary club music – drawing on Goth-Trad’s past work in noise, jungle, Trip-Hop and UK Bass, it’s satisfyingly physical without bowing down to typical trends. — Son Raw

Read: Question in the Form of An Answer: Ka

Last year’s glowing 936 established Peaking Lights as vanguards at converting Jamaican music into alternative energy, alongside Not Not Fun labelmate Sun Araw and British electronic experimentalist Kevin Martin (The Bug, King Midas Sound). Their latest, Lucifer, finds them floating further downriver, merging programmed drums with exotic rhythms made on obliquely tuned guitars and hand-crafted synthesizers. It is the dream-like blur that can only come from having a newborn or being the frequent recipient of opiate-scrambled daydreams. — Weiss

Russian Roulette may well be the best representation of Alchemist’s aesthetic yet: one grounded in the original school of underground rap without being beholden to alienating traditionalism. Though previous releases under his own name didn’t quite reach the bar set by Pete Rock’s Soul Survivor series and his rapping will never match up to Diamond or Large Pro, Russian Roulette’s ballsy format marks it as an essential evolution in a beat tape landscape that’s been sorely in need of a kick in the pants to compete with electronic-oriented work by artists such as the Brainfeeder crew. For fans plugged directly into Hip-Hop’s mainframe, this is that next shit. — Son Raw

10. Shackleton – Music for the Quiet Hour [Woe To The Septic Heart]

From his perch in the shadows, Sam Shackleton has quietly become the most interesting voice in electronic music today both as a sonic architect and as an auteur willing and able to use his technical mastery to explore complex themes. From his earliest singles on Skull Disco to his Techno-influenced releases on Perlon and Fabric to his genre re-inventions with Pinch, he’s progressively honed his craft, using dance music’s structure and limitations to contextualize his music without ever being beholden to their cliches. With Music for the Quiet Hour however, he’s become one of the few artists working today for whom a multi-part long-form suite of music isn’t a pompous nod towards “classical” but a logical step in expanding his vision. — Son Raw

Read: Full Review of Music for the Quiet Hour

The constant mix of the very pretty and the very ugly makes Blue Chips at once disarming, disgusting and unforgettable. The eclectic listeners among you will remember how Annie Clark of St. Vincent was lauded last year for the surprising razor edges that nestled inside her crystalline song structures. Well, Bronson’s working on the same spectrum, in reverse. We expect so much ugliness at any given moment, that all the beauty is consistently surprising, even as it abounds. — Bromwich

Ty Segall and Tim Presley are young guys and they act like it on Hair. There’s no contentment to speak of. No satisfaction. Just incredible talent when it comes to writing guitar songs, and enough confidence to contort pretty melodies into sounds that are rougher, bleaker, and better. — Bromwich

In many ways, Life Is Good is the dramatic counterpoint to his debut album. If Nas had disappeared back into those project buildings after Illmatic, Life Is Good would serve as the perfect bookend to his story twenty years down the road. The album tells a story of a man who has won and lost so many of the life’s little battles that make the damn thing worth living. A real evolution of character can be found here. No longer is he that kid we first met, he’s become a surviving elder statesman of rap, the last ambassador of the Golden Age and most poignantly, a flawed family man. — Doc Zeus

Cancer 4 Cure is both reinvention and inversion. El-P’s first album since putting Def Jux on hiatus in early 2010 marks a break from the old order and another call to arms. Whereas Fantastic Damage served as a Def Jux coming out party and I’ll Sleep When You’re Dead synthesized the sweaty jitters of the mid-Dubya daze, Cancer 4 Cure consciously creates its own iron galaxy. It’s simultaneously able to stand alone but alongside that trademark blend of sneering New York City skepticism. It sheds the bullshit of the past and is stained with the weary residue of an incalculable number of cigarettes, weed deliveries, bodega runs, and blind turns. It’s the best kind of tribute El-P could make: to Camu Tao a record that you can pump like they do in the future. — Weiss

Don’t confuse Habits & Contradictions for a radical re-thinking of gangsta rap; it’s more the desire to annex fresh enemy territory. The title is no error. This is about the breaking of bad habits and the ability to revel in contradictions. It’s 2012. We’re going to have to acknowledge that the best rapping dude on the block might shoot you and drive off bumping Portishead. —Weiss

Consider this Aesop Rock’s Swordfishtrombones, a brilliant baleful experiment conducted by an ox-blade throated barker in his mid-30s, with a slant towards occult characters, and off beat percussion. Both share coffee-black humor and a gift for exploring the gopher holes of the underground.  Rock may claim to be manifestly unfit for the menacing grip of the day, but Skelethon is indelible, pagan torah to his period of exile and emotional maim. –Weiss

What’s surprising is that after half a decade and innumerable biters, Kindred still sounds as fresh and exciting as anything Burial ever released, rivaling his two LPs in terms of quality and depth. It just goes to show that in a field of constant reinvention where the next big thing’s average lifespan is shorter than a fruit fly’s, there’s still a place for well crafted, timeless music built on ideas and emotions rather than cheap tricks and trends. Don’t let the “single” tag fool you, this is the Burial album you’ve been waiting for, as dark and hidden from view as you’d want it to be. — Son Raw

What’s most exciting is the potential R.A.P. Music might have in finally breaking down the artificial barriers between the eternally warring factions of rap. If Killer Mike and El-P can form a beautiful friendship, there is no reason why we can’t hear 2Chainz rock over Pete Rock or Action Bronson on Organized Noize. On Twitter, El-P openly expressed his desire to work on an album with Nas and the mere thought of that Marvel team-up should send true hip hop fans into a sugar-high induced coma of pure joy. Killer Mike is right. This is exactly what the people need. They might really be the space-age Cube and Bomb Squad. No bullshit. —Doc Zeus

Honorable Mention (In No Order):