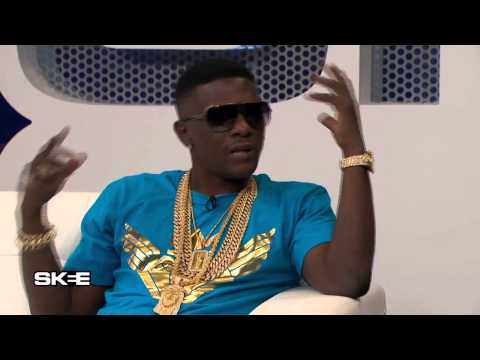 Skip town for a week and you inevitably wind up behind on the latest round from the bard of Baton Rouge. The week I go to New York, Boosie ends up on DJ Skee’s show on AXS TV performing “Smoking on That Purple,” thereby depriving me of the meta experience of exhaling velvet clouds while watching the contemporary Leadbelly. The savage gods have cursed me once again.

The video of the ease-your-mind anthem is below, along with several other clips, including one where I get a shout out on national TV.  My grandmother was very proud of me, even though I had to explain to her what a Lil Boosie was. She is now emphatically pro-ratchet.

Boosie also dropped a new pair of songs that cannot be effectively interpreted as feminist doctrine. The most recent is “She Want Some,” which is pretty much a re-make of “Ima Dog,” and finds Badazz at the club looking for his sixth baby mama. Considering the hook goes, “Oh She Want Some,” I feel you don’t need me to scrutinize the logistics. He is referencing yellow bones and red bones and his Boosie fade. B-Real (not the one from Cypress) handles the beat, which gives it that Nola bounce meets BR murder music stomp — the sort of thing he was dropping with regularity that never got play outside of the Boot, but should become a favorite inside the 504 and 225 area codes.

My favorite of the pair might be the “Cut Her Off Remix,” which adds Boosie, Y.G. and Too Short for a power hour of misogyny. I do not endorse the sentiments contained therein, but this is rap music, suspend your powers of disbelief. Besides, I imagine Bright Eyes is probably worse behind closed doors.

The one thing that you worry about when a rapper ages is that they lose the hunger and power of their voice — especially when the rapper is someone like Boosie, whose demon child clutching daggers vox was everything. Since coming out of Angola, Boosie still spits like he’s blood-thirsty, but has become wise enough to stay out of trouble. It is the best of all Boosie worlds.