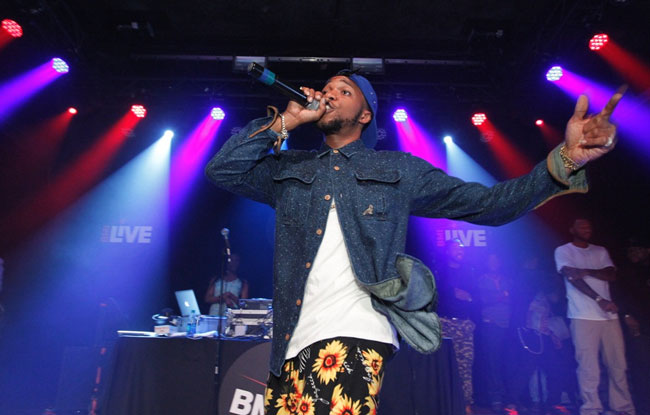 Harold Stallworth is a national treasure.

Last Wednesday, on the mid-Atlantic leg of Curren$y’s “Drive-In Theatre” tour, a few things were immediately apparent. First, the only great entrée to be had at Howard Theatre, the cajun shrimp and grits, had been temporarily stricken from their balcony menu. Second, the production featured on Drive-In Theatre, while absolutely beautiful in the comfort of my car and home, simply doesn’t translate very well at a mid-size venue. And finally, as far as openers go, each of the undercards put forth surprisingly dynamic performances. The line-up felt like a preview of XXL’s freshman class of 2017. I suppose that would make them XXL red shirts, or XXL grade-schoolers. Whatever the case, I figured I’d take the time to introduce their work, if only for the opportunity to beat my chest and scream “I told you so” in the off-chance that these guys catch on one day.

First up was self-described super-producer Tone P. He’s responsible for the thunderous bounce beat behind Wale’s “Bait.” The solo material he performed onstage was objectively cheesy, but he displayed a level of showmanship that could take a barely serviceable rapper a long way. Tone P was accompanied a polished DJ, a pair of stationary guitarists, an oddly-positioned keyboarder, no less than two sputtering fog machines, a universally attractive young woman, and sporadic cameos from the likes of Fatz Da Big Fella and Weensey from the legendary Backyard Band.

The rapper-producer bubble probably burst somewhere between Pharrell’s sophomore album going triple balsa wood and Hit-Boy getting renegaded by his biological father, but I wouldn’t count Tone P out. He’s nothing if not ambitious. For reasons inexplicable, he’s yet to post any solo tracks on his personal Soundcloud account, but “Whipped Pinnacle,” named after a disgustingly sweet brand of French vodka, is a promising instrumental.

Imagine an unassuming white kid from South Philadelphia. He has the voice of a swing voter, the gangly physique of Asher Roth, an esoteric rhyme style indebted to MF Doom, and the disturbing mannerisms of Agallah circa “Ghetto Girl.” J Cole and Fred The Godson think this guy’s rap hands are over the top, but he’s good at putting words together. Sort of. He’s unabashedly corny and oozes confidence. He won over an impatient crowd of black college kids and old heads that were into hip-hop back when it was still discernibly great. This is Major Van Winkle in a nutshell.

Wave Chapelle is a Milwaukeean rapper that thought it would be a good idea to run with Wave Chappelle as a stage name. Earlier this year, he inked a deal with Yo Gotti’s vanity label CMG. Throughout the entire set, Chappelle’s DJ kept launching a drop that I’d like to think was taken from Nintendo’s T&C Surf Designs. Every 90 seconds or so you would hear a succinct warning from a disembodied voice: “WAVES!” His appearance was generic in the way that gels with casual rap fans, as was his music—offensively skinny jeans, ambiguous hairstyle, double-time flows, bass, bass, bass, 808s, high hats, upright bass, moog bass, more bass. Admittedly, I was entertained.